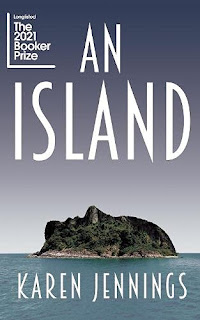 Tony Cross is reading all the books on the Booker Prize longlist ahead of this year's award in November. Here are his thoughts on An Island by Karen Jennings...

This is a short novel written by South African writer Karen Jennings. It is on the Booker Prize Longlist, which is a surprise to most people. It is set off the coast of an unnamed African country and takes place over four days. It tells the story of Samuel, a lighthouse keeper. He has been on the Island, alone for years. Every two weeks a ship delivers supplies.

The book’s timeline is fluid. We get to find out Samuel’s life story in flashbacks. You must pay attention because sometimes the timeline moves from present to past to present in short spells. We get to see Samuel’s life story. It hasn’t been an easy life starting from when he and his family are forced from their land by the unnamed colonisers. You could see Samuel’s life as representative of millions of African people. Or even you might see Samuel as a metaphor for Africa itself, although I am probably stretching there.

Samuel has got used to being alone. He is the master of all he surveys, however basic that might be. His life is touched on the peripheries by events on the mainland. The current government doesn’t seem to be too bothered about the lighthouse. His radio has failed. Bodies wash up on the island occasionally fleeing from some unspecified foreign country. Samuel has buried the bodies under stones to form a boundary wall.

Then one day one of the bodies turns out not to be quite so dead as he looked, which triggers Samuel. After the man, whose name we never learn because Samuel cannot understand him, arrives Samuel’s flashbacks become more frequent and less hard to separate from the present. Jennings seems to be writing in a way that reflects his trauma and confusion when his routine is overturned.

He was in prison for twenty-five years. He was institutionalised. There is a section describing his confusion on his release and the awfulness of his reception back into a changed world. And he’s been institutionalised again on the Island.

The ending of the book is not unexpected. But there was something about its expectedness that I found disappointing, even though that ending feels ‘right’. And, as I said, perhaps Samuel’s life reflects African history and of the consequences of colonialism and what followed. Or perhaps Samuel is just an individual caught up, brutalised, and institutionalised by his country’s history. He never seems to catch much of a break and everyone, after a certain point, seems to treat him with a degree of contempt.

I thought it was worth reading, but I wasn’t bowled over by it in the same way that other people seem to have been.
Follow Tony on Twitter at @Lokster71
The 2021 Booker Prize longlist is:

The winner will be announced on 3rd November 2021.
Image - Amazon
Email ThisBlogThis!Share to TwitterShare to Facebook