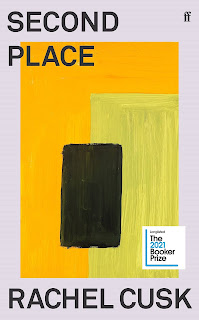 Tony Cross is reading all the books on the Booker Prize longlist ahead of this year's award in November. Here are his thoughts on Second Place by Rachel Cusk...

Second Place takes the form of a long, long letter from M – I don’t think we ever learn her actual name – to Jeffers. Jeffers is us. Basically, the audience for M’s tale of her life and the complications that the entrance of an artist, L, brings to it.

The foundations of Cusk’s story are built on – if built is the right word – Mabel Dodge Luhan’s 1932 memoir, “Lorenzo in Taos”. That book tells the story of D.H. Lawrence’s visit to her home in Taos, New Mexico. Lawrence does not come out well in it apparently. The clash of the idealised version of the artist with the real version being a painful experience. Cusk has made L an artist not a writer.

Cusk in her acknowledgements says that the book is “…intended as a tribute to her spirit.” Now, I’ve not read “Lorenzo in Taos” but, after reading Cusk’s book, I really want to. M’s voice is, apparently, an honest one. She is self-aware – perhaps too self-aware. And as she tells her story Cusk manages to bring in meditations on art and creativity; on women; on what freedom is; on parenthood. It includes one of the best quotes on what the obligation of being a parent means. But I speak as someone who isn’t a parent. I suspect it would sound right to my parents:

‘I believed I am obliged to let you go,’ I said, once I’d thought about it, ‘but if that doesn’t work out, I believe I am obliged to remain responsible for you forever.’

It is also rather good on love. M is married to Tony – who I think is the most likeable character in the book [and not just because of the name? - Ed]. Although I think only L is truly something of a git and even then, M manages not to judge him too harshly, even towards the end. All the other characters seem like real people, but perhaps only Tony is truly comfortable with who he is.

I have digressed from love. Tony is quiet, but that quietness makes M feel invisible sometimes. When she talks to Tony about this he says:

“He was silent, lying on his back in the darkness and staring up at the ceiling. Then he said: ‘I feel like my heart is talking to you all the time.’”

Which quite a wonderful line.

The question I can’t quite answer is how much Second Place is attached to its original source material. If you’ve read Luhan’s book, does this have an additional layer that improves it or does knowing the material make this seem less effective. I can’t answer that question. Perhaps reading them this way round will affect how I see Luhan’s work? The knock-on effect of the interconnectedness of all things. Does knowing that L is D.H. Lawrence matter? If I knew more about him then possibly. He has a habit of cropping up in other people’s work. He’s there in H.D.’s roman a clef “Bid Me To Live”, for example. He doesn’t seem to have been an easy man to get on with.

That’s an issue that this book did make me consider.

I enjoyed it. I liked the ideas, and I liked most of the people in it. I just wasn’t swallowed up by it. Perhaps because the M’s style is so analytical. Worth a read.
Follow Tony on Twitter at @Lokster71
The 2021 Booker Prize longlist is:

The winner will be announced on 3rd November 2021.
Image - Amazon
Email ThisBlogThis!Share to TwitterShare to Facebook