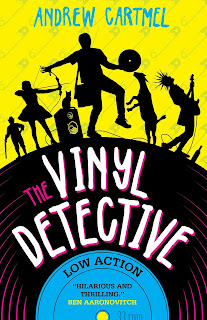 Tony Cross takes Andrew Cartmel's latest Vinyl Detective novel for a spin. Low Action is out now from Titan Books...
This is the fifth volume in The Vinyl Detective series, and I found it to be as entertaining as the previous four. [Read Tony's review of those here, here, here and here - Ed] The central character, still unnamed, is a record collector, but has developed a sideline as an actual detective. The stories usually revolve around the search for a record, which triggers a series of unfortunate events. Often murder. Usually murders. Plural.

There is a certain formula to them, but formulas do not matter if they are fine formulas done well. Every genre has its tropes, but tropes are not a bad thing in themselves. They are only problematic if they are not done well and Cartmel does them well.

This one starts a little differently. Helene Hilditch, formally Howlin’ Hellbitch the guitarist in all-girl Punk band, The Blue Tits, has already had several attempts made on her life. Her boyfriend, Erik Make Loud, a rock guitarist and local associate of our hero gets The Vinyl Detective to start investigating using a rare first pressing of the Blue Tits first album as an excuse.

Helene seems to have made a lot of enemies over the years and finding the culprit will turn to be difficult. Cartmel does a fine job of laying trails, setting up red herrings and introducing us to a cast of interesting characters before revealing who the potential killer is and why they are doing it. It is a fun journey.

We also get to meet the regulars and learning a little more about them. There is Nevada, The Vinyl Detective's wine-loving and charity shop clothes shopper extraordinaire girlfriend, who has a degree of martial nous lacking in our hero. Tinkler, his one-track minded sexual frustrated sarcasm factory friend whose role seems to flirt badly with women and be a bit of a pain in the arse. There’s Stinky Stanmer, who is an annoying stealer of ideas and general dick. He seems to be an unavoidable presence and gossip. Agatha, their black cab driving ally and cat sitter. I think it is the regulars I enjoy the most in these books. You start wondering how irritating Stinky Stanmer is going to be this time around. We get to find out more about Nevada – and surely there is a "Nevada: The Early Years" spin-off somewhere in there Mr. Cartmel.

But character is what Cartmel does well. None of them are ever entirely clichés, even if that is how they first look, Tania Strack being a fine example in this novel. Indeed, I wonder if she will appear in a future novel.

So, if you are looking for an entertaining detective story with a slightly different vibe then Low Action might just be for you. And then you can go back and read the others. Low Action is standalone enough that you do not need to have read the previous four to enjoy it. There are not lots of esoteric references to previous stories, which means any of them can be your entry point.

This ones a good ‘un though.