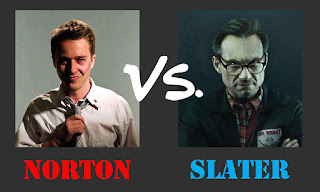 Steve Taylor-Bryant is a bit upset at being made to work on his birthday, so he has gone out of his way to be difficult. This article will end with you, dear readers, having to take over. Here’s why…

It’s always sad when two luminaries of the screen are so close to perfection but their birthday falls on the 18th of August, one day too late to be classed as ultra-cool (Steve, just because your birthday is today, the 17th doesn’t make you “ultra-cool, who uses that terminology anyway? - Ed) but that’s what happened here. Both Mr. Robot and The Narrator turn 50 years old tomorrow. I’m a fan of both stars, neither has a back catalogue without poor choices but when they get it right, they are two of the best in the business. I was going to do a top ten for each, list my favourite films of each, but that’s a lot of writing and research considering I’m naturally lazy and today is the best day to have a birthday on (he’s hungover already the gin soaked lush- Ed).

Instead I’m putting the guys to battle! Let them fight for supremacy, to be King of the wrong birthday in August! I’ve picked my top five from each and I’ll pitch the titles against each other with an outcome that favours one or the other of these ridiculously talented guys. What could possibly go wrong? 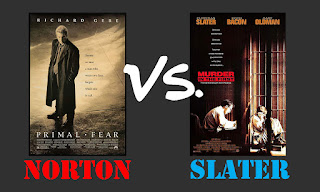 
Murder in the First vs Primal Fear

I love both these films. Both are legal thrillers containing prisoners with mental health issues, both contain incredible lawyers, both contain plot holes you’ll forgive due to how good the cast of both films is. Slater plays James Stamphill in Murder in the First, and idealistic young lawyer who decides to defend an Alcatraz prisoner accused of murdering another inmate. Kevin Bacon took all the plaudits for his portrayal of Henri Young, a man driven insane by being kicked in solitary confinement for three years instead of the nineteen days that was supposed to happen. Gary Oldman performs perhaps the most hateful bastard he has ever performed as Milton Glenn but Slater more than holds his own amongst the others in a film that was cruelly snubbed any Oscar recognition. In Primal Fear Edward Norton is in his first film appearance and ends up with an Oscar nomination for his portrayal of Alter Boy turned murderer Aaron and blows off screen Richard Gere Who was one of the most bankable actors in Hollywood at the time.

The result. Had Christian Slater swapped roles with Kevin Bacon he’d have been a clear winner as Murder in the First is the slightly better film, however the way Norton plays the twist in Primal Fear is just a stunning piece of acting and he pinches this competition on a Split Decision. The judge does demand you all go and watch both movies though. 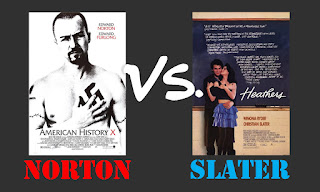 It’s at this point, fight two, that I’m regretting doing this already. How do put the iconic Heathers against such a powerful film like American History X? In Heathers Slater is loner sociopath J.D. befriended by Winona Ryder’s Veronica to basically help her kill all the popular kids in her high school. This was a brave film to make at the time. Peer pressure, cliques, and teen suicide are almost the anti-John Hughes high school tropes. Somebody took all that worked well in those glorious Hughes comedies and mixed in some deathly dark turns and even to this day Heathers is an uncomfortable watch that still tugs at all my inner heartstrings. American History X is also a powerful film taking on an important subject in race. Norton plays Derek, a neo Nazi white supremacist who changes his ways in prison but comes out to find his younger brother Danny, Edward Furlong, travelling down the same path. American History X is an incredible slice of cinema that at the time again felt brave and rightly Norton landed another Oscar nomination.

However... I didn’t enjoy Furlong in the Danny role and find his acting style quite wooden. With the exception of that Kerb stomp not much else from the film stick with me. Heathers just hung around in my consciousness for longer and wins on points. 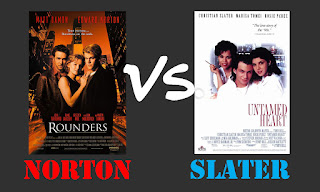 Rounders is rightly remembered for being a great film in a great little period for cinema where you could make a non-superhero/sci-fi film for a reasonable budget over $10million and that wasn’t considered strange or excessive. The casting in Rounders is flawless, a fantastic ensemble including Matt Damon, John Malkovich, Gretchen Mol, alongside Edward Norton. Untamed Heart on the other hand rarely gets spoken about nowadays despite being a beautiful film, possibly the only love film I’ve ever been moved by, and definitely Marisa Tomei’s greatest performance.

I think to find a winner amongst these reasonably budget films I’m going to have to weigh up the casts and Untamed Heart just scrapes it by a round due to Slater and Tomei having to do more of the work than Norton did in Rounders. 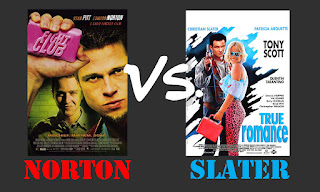 Ouch, I’ve given myself a tough one here! True Romance was impeccable film making. From Tarantino’s screenplay, to Tony Scott’s direction, from the massive ensemble of some of the screens biggest ever stars, to the brilliant soundtrack there is not one weakness in the film. Amongst the many huge stars, it could have been hard for Slater to shine but he rose to the occasion and, alongside Gary Oldman as Drexl, stole the show with some of the most quotable dialogue of the 90’s.

Fight Club can’t be spoken about.

Winning by TKO is Fight Club. I just can’t tell you why.

Nope, I’ve had enough now. It’s 2-2, I just want more gin and birthday cake so with two films left I’m quitting. The pressure is too much, it’s my birthday I shouldn’t be forced into making the final decision. You do it. It’s only the comedy round, anyway, not like it’s important. It’s only two of the best comedies ever made, what’s the worst that can happen? Tell you what. Go over to our social media, I'll put a poll up for the weekend on both Twitter and Facebook. Vote for your favourite from these two over the weekend, tweet us (or comment on Facebook) with hashtag #NortonVsSlater and Monday [when he finally sobers up - Ed] I’ll announce the winner and send someone some DVDs. Happy sober voting sober folk... 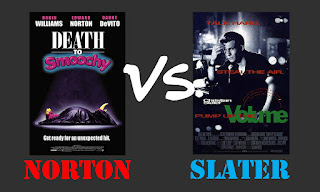 Death to Smoochy vs Pump Up the Volume: The Public Decide...

Because it's our great and glorious leader @STBwrites birthday today, we let him choose today's theme day. Read the introduction to #NortonVsSlaterDay here https://t.co/9CfuVT82d6 then VOTE for your favourite film between THESE TWO FILMS...
— The DreamCage (@TheDreamCage) August 17, 2019